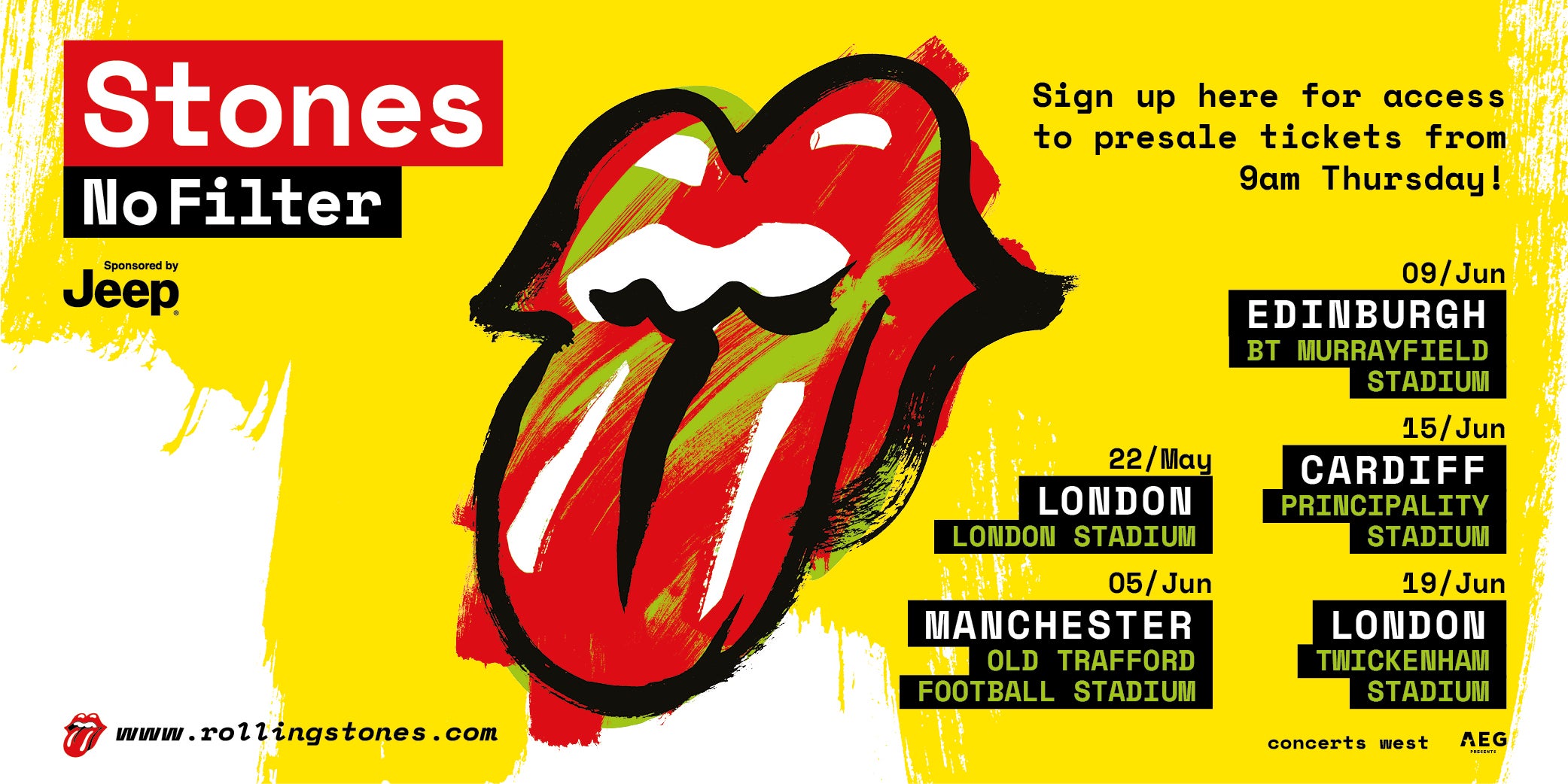 Just like they promised The Rolling Stones are back where they belong on home turf with a number of massive UK concerts in May and June plus others confirmed for Ireland, France, Germany, Czech Republic & Poland.

Part two of the ‘STONES - NO FILTER’ tour, sponsored by Jeep®, sponsor of The Rolling Stones European tours since 2014, sees Mick Jagger, Keith Richards, Charlie Watts and Ronnie Wood continue on from their hugely successful sold out European trek in the autumn of last year.

The Rolling Stones will treat fans to a set list packed full of classics such as ‘Satisfaction’, ‘Paint It Black’, ‘Tumbling Dice’ & ‘Brown Sugar’ but each night they will include a couple of unexpected tracks and randomly selected surprises from their formidable arsenal of songs.  As always when the Rolling Stones come to town they will bring a spectacular production and state of the art stage design.

Keith Richards – “It’s such a joy to play with this band there’s no stopping us, we’re only just getting started really.”

Mick Jagger - ‘‘This part of the ‘No Filter’ tour is really special for the Stones. We are looking forward to getting back onstage in the summer and playing to fans in the UK and Ireland. Its always exhilarating going to cities we haven’t played for quite a while and also some new venues for us like Old Trafford & The London Stadium.’’

Charlie Watts – “The Stones audience is the glue that keeps us together. The best and most satisfying moment is when you are reaching the end of the show and they are all going nuts.”

Ronnie Wood - “When I look out at the sea of people when we play all I can see is smiles. It’s heart-warming and I’m glad we make people happy. Music makes me happy, and it makes them happy…. its infectious”

The Rolling Stones last played in the UK in the summer of 2013 with their unforgettable Glastonbury headline show on the Pyramid Stage, followed by two sensational shows in London’s Hyde Park where they played to a sold-out crowd of 65,000 fans.

The Stones - No Filter tour, produced by Concerts West/AEG Presents, kicks off in Dublin (Ireland) on May 17 and then heads for the UK – London, Manchester, Edinburgh, Cardiff, a second London show at Twickenham Stadium, plus Berlin, Marseille, Stuttgart, Prague & Warsaw (see full details below).