Congratulations to Manchester four-piece Rixton, who took the Number 1 spot for their debut single this weekend!

They were against stiff competition from Nicole Scherzinger but emerged victorious with what has to be one of the biggest songs of the summer, ‘Me & My Broken Heart’. 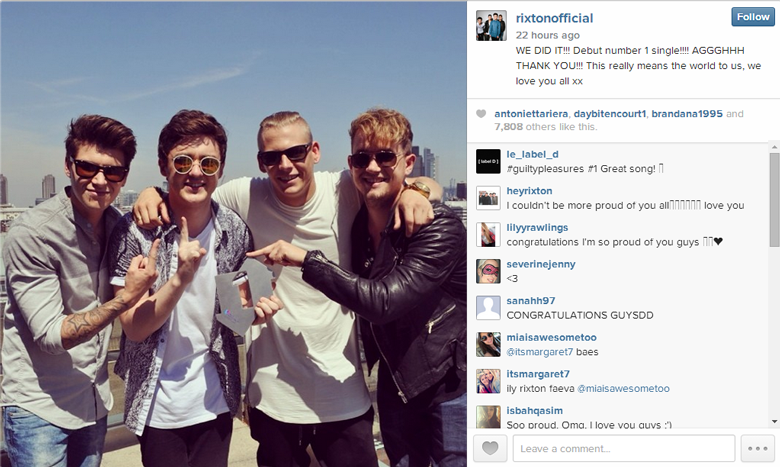 Things were looking promising in the midweek charts, a fact that was noticed by none other than Justin Bieber, who reached out on Twitter to pass on his support…

“Shoutout to my guys @RixtonOfficial for having the #1 spot in the UK right now. I like that band. I got a hit for them. Congrats fellas.”

We’re very intrigued to hear more about the hit Justin mentions, has he penned a song for Rixton?

Rixton lived up to a promise they made to their fans earlier in the week by booking a tattoo artist for their show on Sunday to ink a broken heart tattoo on each of the band members.

Just to top off what has been an incredible week for the band, they’ve also been nominated for 3 Teen choice awards. The band tweeted another message in the string of celebratory tweets coming from their Twitter.

These guys have an incredible future ahead of them! Stay tuned for more Rixton news coming soon.