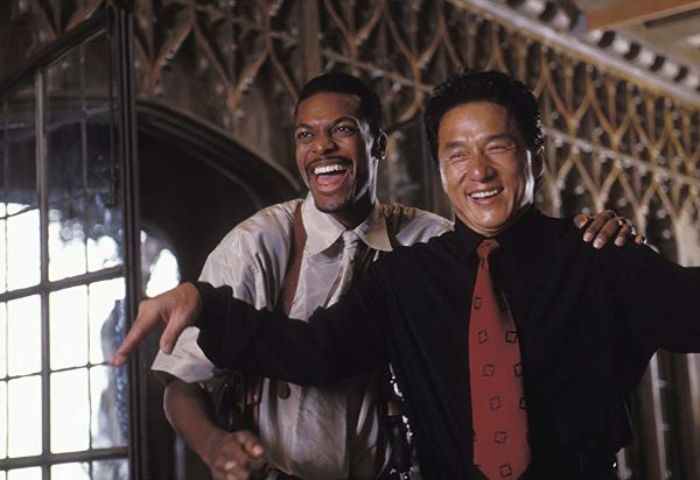 Let’s go back in time to when Rush Hour first entered our lives. It’s 1998, and life is good. The Spice Girls, recently down one Ginger Spice, rule the world from the towering heights of their platform shoes. Google is in its very first year, Furbies are flying off the shelves, All Saints tops the charts with the wallowing breakup ballad “Never Ever” — and the now-OG Rush Hour is in cinemas. The unlikely team of Jackie Chan and Chris Tucker is ready to kick some organised-crime ass, and you’re here for it. You pop on your Skechers, plastic choker, or bucket hat and head to the cinema.

Twenty years later, in 2018, watching Rush Hour is a markedly different experience from watching it in 1998, and not just for the knee-jerk reactions to some of the jokes. (Like, wait, can we laugh at these jokes? Aren’t they more than a little bit racist? Ha, ha… Ha?) First off, Chris Tucker’s wardrobe, even as a cop, is outlandishly 90s enough to make you wince, and the kung fu-type fight sequences are hammy yet intensely satisfying. But the most salient takeaway from a 20th anniversary viewing of this buddy-cop genre mashup is: I had forgotten how many elements of this film are still with us two decades later, deeply embedded in our culture. And now, a look back at seven of the funniest Chris Tucker moments in the film that spawned a globally successful trilogy and continues to make us laugh.

Rush Hour is replete with nods to the King of Pop, Michael Jackson, and the end of the opening scene is no exception. Tucker’s character Detective James Carter (dressed like Shaft’s little brother) fires on a car full of C-4 explosive and sends it sky-high in flames. Obviously, this is followed by an MJ-inspired victory dance that sets the tone for the whole film.

We’ve got to tip our caps to the unofficially most-quoted Tucker line in the film. It’s cringey, insensitive, melodramatic, and… hilarious.

A word to the wise: “Don’t you ever touch a black man’s radio!”, not even when you want to listen to a) The Beach Boys or b) Edwin Starr’s “War”.

In a vague attempt to keep up his image as an enforcer, Carter takes Jackie Chan’s character Lee to a bar and throws his weight around with the patrons there, who we find out soon after are Carter’s friends — and even his family. His crackdown on one poor dude for smoking a questionable cigarette is a hilarious back-and-forth that leads to the glorious portmanteau of “cigaweed”. (The actor playing the smoker even appears in the credits as “Cigaweed Man” — what a role to have on your IMDB page, right?)

As Carter notes, to “speak American”, you need to be able to pronounce “y’all”. Lee doesn’t get it quite right, but soon we’re witnessing a true cultural exchange as the two swap dance moves and stride off to take down a criminal empire.

Lots of the hand-to-hand fighting action in Rush Hour happens at an almost unfathomable speed. So when Carter gets drubbed in the face by a lightning-fast foot, his cross-eyed retort is understandable — and one of the film’s most famous lines.

In a reference to then-president Bill Clinton’s daughter, Detective Carter responds incredulously to the kidnapper’s demands: “50 million dollars? Who you think you got, Chelsea Clinton?”. As the credits roll and outtakes play, we see just *how* difficult it was for Chris Tucker to remember Chelsea’s name(s).

Chris Tucker returns to the UK to bring a smile to your face for four shows only. Whether you’re a Rush Hour die-hard, a Fifth Element or Friday fanatic, or you just like laughing your ass off — understand the words that are coming out of my mouth: get. your. tickets. now.