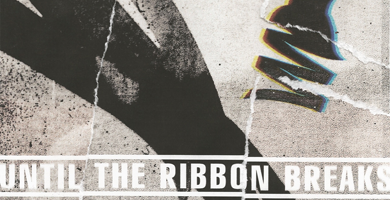 Until The Ribbon Breaks

Remember the days when gifting mixtapes was the definitive romantic gesture? That careful ritual of combing through your record collection, choosing a myriad of musical moods and memories for the recipient to imbibe and devour again and again, until the tape wore out - Until The Ribbon Breaks.

Having just wrapped up their first North American tour supporting Lorde, UTRB, the three piece band fronted by Cardiff native, Peter Lawrie Winfield recall how as youngsters you would "give a girl or a friend a mixtape to let them know what music you loved. It didn't matter if one song was De La Soul and the next was R.E.M. It was about the feeling the entire collection conveyed.”

Drawing both their approach and name from their art form, Until The Ribbon Breaks (UTRB) are a uniquely skilled, singing, songwriting, producing collective recently signed to Universal Republic Records.

Decidedly honest, their music embraces an old-school passion for intricate, clever writing and the slicing together of sounds, samples and lyrics; a skill demonstrated in debut track ‘Pressure’ and the accompanied self-made video which they released on YouTube earlier this year.

The powerful EP, ‘A Taste Of Silver,’ which followed, treated listeners’ ears to something compelling and unique. Mesmeric, dark apocalyptic pop, meets infectious “Avant RnB” in a way that is both haunting and beautiful in its raw confrontation of human emotion.

Boldly and without trepidation, the music tells tales of love, loss, lust, infatuation, regret and fear all enveloped in cinematic imagery, which could sit comfortably within the poignant scenes of any Spike Lee, Tarantino or Scorsese film.

Having just finished a 5-date sell out tour with Phantogram across the US, UTRB are back in the studio working on their debut album due for release in 2014.

Until The Ribbon Breaks - Pressure

Brass Against set to release debut…

Coachella: 20 Years in the Desert