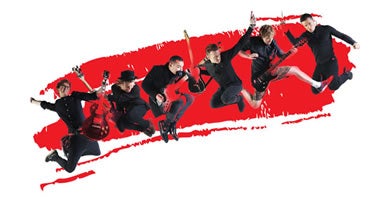 McBusted’s UK dominance continues as the McFly and Busted boys announce two spectacular outdoor live shows this summer. Pandemonium is expected to hit the south west and East Anglia as pop’s biggest supergroup touch down at Weston-super-Mare beach and Ipswich Chantry Park on 28 and 29 June respectively. Adding to the excitement and joining McBusted will be special guests, and one of the biggest boybands of all time, The Backstreet Boys in what’s set to be the most rip-roaring concerts not to be missed!

McBusted say, “We cant wait to be adding further outdoor shows and look forward to playing all the Mcfly and Busted hits.”

Fans of the McBusted have been in a frenzy since they announced their unification last year. A 35-date 2014 arena tour including 3 sold out O2 shows and a headline show at Barclaycard presents British Summer Time Hyde Park on July 6th have sent fans into hysteria. McBusted is the coming together of two of the UK's biggest acts - Busted and McFly, who throughout their career have combined their winning, infectious pop and rock songs with their irresistible personalities and humour. Between them, they have an arsenal of hits to unleash, including Busted's 'Year 3000' and 'What I Go To School For' combined with McFly's 'Shine A `Light' and 'All About You'.

Busted sold out Wembley Arena a record-breaking ELEVEN times in one year, sold HALF A MILLION concert tickets in the UK in 2004, and had two albums go FOUR TIMES platinum in the UK alone.

Brass Against set to release debut…

Coachella: 20 Years in the Desert